The Birth of Pakistan 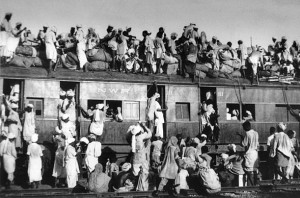 Pakistan, or the Islamic Republic of Pakistan as it is officially known, is a relatively young country, emerging on 14 August 1947. Formerly a part of the British Indian Empire, Pakistan gained its independence according to the ideas put forth in the Lahore Resolution authored in March 1940 during a meeting of the All India Muslim League. The League was formed in 1906 out of concern for the minority Muslimsâ€™ rights and protection in a majority Hindu country, and what might happen to the minority if India were to gain its independence. For the Muslims in India, national autonomy would merely mean transferring the control of their fate form one external group to another, perhaps with significant consequences. It seemed the only way to ensure a future for Muslims in India was to carve out a territory all their own where at last, they could be the masters of their own destiny.

The Lahore Resolution demanded that separate geographic regions be demarcated, separating the Muslims and Hindus of India so that the two could exist without interference, each free to live according to their own culture, philosophies, and literature. Muhammad Ali Jinnah, known as the founder of Pakistan, said the two groups â€œbelong to two different civilizations that are based mainly on conflicting ideas and conceptionsâ€ and therefore, India must become two: a home for the Hindus in India and a home for the Muslims in what would become Pakistan. The Lahore Resolution was passed on 24 March1940 by the All India Muslim League and set the principles toward which they would work, while half a world away, Europe tore itself apart in a war that would ultimately mean freedom for the colonies and the push Pakistan needed to claim its independence. 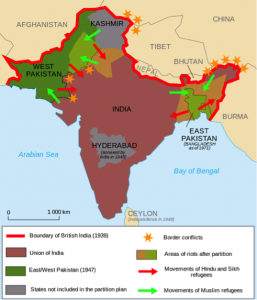 Following the conclusion of the Second World War and the downfall of the ideologies that had spurred so much war and destruction, colonialism was brought to a close and Britain succumbed to international pressure to grant independence to their colonies. On 14 August 1947 the new independent nation of Pakistan was born, followed closely by India’s independence on 15 August 1947. The new boundaries were outlined in the India Independence Act and were drawn according to religious demographics. Not unusual with partitions of this nature, over 12 million people were displaced and forced to migrate to the proper side of the newly drawn lines resulting in the deaths of hundreds of thousands of people and mounting hostilities between the new neighbors. Interestingly, rather than combining the Muslim majorities in the east and west, Pakistan was initially drawn into two parts divided by India in the middle. Unsurprisingly, this arrangement was unsuccessful and, following a civil war in 1971, Eastern Pakistan broke off and became Bangladesh. The region of Kashmir in the northern portion of the territory was not settled in the India Independence Act and still remains a point of contention between India and Pakistan today.

Pakistanâ€™s birth was a mix of resolution, circumstance, hardship, and accomplishment and it would set the stage for what would be a tumultuous and rewarding history as Pakistan established itself as a Muslim nation.