Pakistan is a small country with a large population and a surprising number of languages; more than 70 according to Ethnologue: Languages of the World. Some are much more prominent and widespread than others, but they all hold a certain level of importance within Pakistan.

The primary languages in Pakistan
Urdu is the national language of Pakistan and its lingua franca. It is Pakistanâ€™s most widely used and understood language and serves as a bridge language, allowing people throughout Pakistan with different mother tongues to communicate when they come in contact. So while it may not be everyoneâ€™s first language, it is almost always peopleâ€™s second language and it is the language most often taught in schools. While Urdu is the language most associated with Pakistan, a small percentage of Pakistanis (typically those particularly in tribal lands) do not speak or understand Urdu at all.

Although Urdu is the national language, the official language of Pakistan is actually English. This means that it is the language used by the Pakistani government for official forms and documents, although English is not necessarily spoken during Pakistanâ€™s government proceedings. While a large number of Pakistanis speak English, it is generally only spoken by those with access to higher quality schools and tends to be much more prominent in metropolitan areas. English is very prominent in higher education and many degree programs are taught entirely in English, especially those trades that are often conducted internationally including most programs for IT and web development.

It is not uncommon in Pakistan for an individual to speak multiple languages. 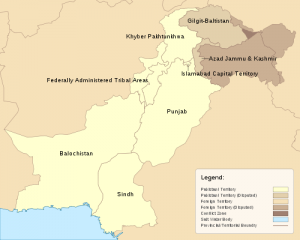 There are four provinces in Pakistan, and each has its own language:

People raised in each province will generally know the provinceâ€™s language, and while some will choose to use it as their primary language, most also know Urdu since traveling is made difficult without it. Those who speak English therefore may speak three languages.

Some of the other languages spoken throughout Pakistan include Hindko, Saraiki, Jhangochi, Kashmiri and Kalash. Some languages are more prevalent in metropolitan areas, while others are more prevalent in rural or tribal areas. It is somewhat unclear what percentage of Pakistanis speaks each language, but it is clear that there is no shortage of language diversity in the densely populated country.

Language at Allshore
Allshoreâ€™s Pakistan offices are in Islamabad, Lahore and Karachi. Lahore is located in the province Punjab, and thus many of the developers and team leaders in that office speak Punjabi. The Islamabad office features a little more language diversity, with some speaking Punjabi, and others speaking Pashto or Urdu. The Karachi office, on the other hand, features mostly Urdu speakers. Like the majority of Pakistanis, Allshoreâ€™s Pakistani team members are all able to speak and understand Urdu, but some may prefer to use their regional language when they can. Though Allshore employees conduct all business in English, it is clear that our Pakistani team features an abundance of cultural and linguistic diversity.