A Book Review by Anne Sutherland 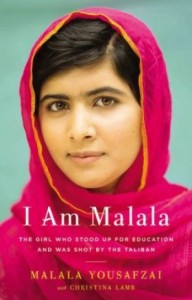 Of course I had heard of MalalaÂ Yousafzai. I, like the rest of the world, was shocked and dismayed that a young girl had been shot for going to school. What I didnâ€™t know, however, was her whole story.

Originally I thought that Malala had been a random target; perhaps she was just the first person on the bus that the shooter saw. Since her shooting, Malala has been a beacon for womenâ€™s rights and education. Even before that though, she was fighting for girlsâ€™ right to education.Â “I Am Malala” is not just the story of a brave girl; it is the story of a girl, her family, her valley and Pakistan.

I thought the story began with Malala, but it didnâ€™t. The other hero of this tale is Ziauddin, Malalaâ€™s father. He began the fight for education long before Malala was born. A determined yet poor man, he decided that against all odds he would create a school for both boys and girls to learn, and he did. At the time of Malalaâ€™s shooting, which forced the family to relocate to the UK, Ziauddinâ€™s school had 1,100 students.

Though his ultimate goal was a school, Ziauddin worked hard to better the community in other ways. Sometimes this was unintentional. For example, while attempting to register his school, a government official angled Malalaâ€™s father for a bribe. Ziauddin believed this to be wrong, but also didnâ€™t have the money to pay such a bribe. To overcome this obstacle he organized an association for the Swat area schools, which grew to include 400 principals.

Malala talks about how her dad felt different than his sisters while they were growing up. He was allowed to eat eggs, while the girls were not. His sisters would be given the wings of a chicken, while he got the better breast meat. They were even not allowed to put milk into their tea while he could. He got the better things, while they went without. They were not allowed to go to school, and were simply â€˜thereâ€™ until they got married. After growing up seeing these little differences in the way his sisters were treated, Ziauddin didnâ€™t want his children to be treated that way. He celebrated Malalaâ€™s birth just as he did his sonsâ€™. He sent her to school to learn just as his sons. He created a school for both girls and boys for this reason.

Things were going well for the family: the school was slowly growing and Malala was doing well in school. Enter the Taliban.

The Talibanization of Malalaâ€™s valley was gradual. The violent rule of the Taliban in the Swat valley began with a simple radio station. Mullah FM had popularity from the beginning, and Maulana Fazlullah, the founder, was seen as a good man attempting to clean up Islam and turn people back to God. The militants even helped the area in times of crisis, such as disastrous floods and earthquakes. All of these actions built trust. However, as Fazlullah and his organization gained power, their actions changed. Harassment became more common, and violence crept into the cities and towns.

Slowly, Malalaâ€™s life in the Swat valley changed. At first, Fazlullah encouraged people to get rid of CDs, DVDs and televisions. Shop owners even closed their businesses voluntarily, receiving compensation from the Taliban. Malala tells of how sad she was to no longer be able to watch videos from stores. The family kept its television, but kept the volume low and moved it into a cupboard to be safe. Eventually this no longer worked, as all the cable channels were switched off.

There were other problems caused by Fazlullahâ€™s show. Women were now harassed if they were not in burqas, and eventually banned from going to the bazaar. While Malala didnâ€™t like shopping, her mother, Thorpekai, did, and was frustrated and broken hearted about not being allowed to go. Malalaâ€™s mother had initially enjoyed listening to Fazlullah, and admired him greatly, but she soon saw his true colors. Once he began preaching that education for girls was wrong and against Islam, her mind was set against him.

Running the school became even more difficult, as social pressure to close it continued. School uniforms were forced to be changed, relatives pulled girls out of the school, anonymous threats were received and people who promoted education for girls were attacked. At first the girls were upset that they were no longer allowed to go on school trips, but later they simply feared for their safety getting to school. Paranoia became a part of everyday life. Malala began taking different routes to school, and would even check every window and door in the house after everyone had gone to bed.

The entire family was expecting an attack. Malalaâ€™s father was the assumed target, however.

Malala and her father had drawn the attention of the Taliban. Ziauddinâ€™s protest of the Taliban had been vocal, and he had been named several times as a troublemaker. Malala also had made a name for herself. At the young age of eleven, she wrote an anonymous blog that was produced through the BBC about life under Taliban rule. Eventually her identity became known, but this did not stop her. The father/daughter duo did interviews in Pakistan, gave speeches and continued to speak out.

Then, one warm summer afternoon, Malalaâ€™s world changed forever. A man boarded the school bus that she was riding and shot her in the head. The bullets that were fired at her also hit two other girls, both survived. Malala was rushed to a military hospital, where she was cared for by Pakistani and visiting British doctors. The decision was made to move her to a hospital in Britain, and the family would follow. No one knew then that they would not return to Pakistan. Malala eventually gained consciousness and began the slow road to recovery, as support and love poured in from around the world. Malala and her family are still living in Britain, and Malala continues to speak out. On her sixteenth birthday she spoke before the United Nations and said, â€œLet us pick up our books and our pens. They are our most powerful weapons. One child, one teacher, one book and one pen can change the world.â€

Malala is an amazing young woman, and she was lucky enough to have an amazing family. Malalaâ€™s love for her father shines in her book, and it is just as much a tribute to him as it is to her. Without his love, guidance, and hard work, Malala wouldnâ€™t have been able to go to school, and she may have never learned to read at all. Without her father, we would never have heard this heartbreaking and courageous story âˆ’ the story of a man and his daughter determined to make a better world.