The 10th of Muharramâ€”the first month of the Islamic calendarâ€”is marked as an Islamic holy day. This year, according to lunar calendar it falls on November 15. It is a day that is recognized by Muslims all over the world, but the day means different things for different people and is honored in many different ways. Ashura is most significant for Shia Muslims who hold it as a day of mourning for the death of Hussain-ibn-Ali, the grandson of the Prophet Muhammad who was martyred at the battle of Karbala by the Umayyad troops in 680 AD. Shia Muslims have their own unique celebrations for this holy day, but it is a holiday that is observed by all Muslims.

The History
Hussain-ibn Ali was the third Shia Imam. When he was marytred in 680AD â€“along with his family and friendsâ€”it was a dark time for the followers of Islam. Yazid ibn-e-Muawiya was in power and was openly going against the teachings of Islam and changing the Sunnah (way of life) of Muhammad. Hussainâ€™s death was significant because it marks a revival of Islamâ€™s original message.

It all happened when Hussain was on his way to Kufa, a city in Iraq. He has received letters from people living in the city asking for his help. Outside the city he was confronted by the army of ibn-e-Ziyad, Kufaâ€™s governor. Hussain and his companions (in total around 72 men and a few women and children, some of whom were family members) stood against an overwhelming army that was commanded by ibn Saad. In addition to the threat of Ziyadâ€™s army, Hussain and his companions dealt with great thirst, as the nearby Euphrates River was blocked by more of Ziyadâ€™s men. The odds were overwhelming and in the end Hussain and all of his companions were killed. Before being killed, Hussain said, “if the religion of Mohammad was not going to live on except with me dead, let the swords tear me to pieces.â€

The battle of Karbala is such a unique battle in which men and women, old and young, black and white, Arab and non-Arab had a role. In the list of the martyrs of Karbala, we see the names of nine or 10 boys under the age of puberty along with the names of 15 non-Arabs and several women, all of whom stood bravely side by side until the end.

The day of Ashura is also significant for other reasons. According to Sunni Muslims, Muhammad recommended fasting on this day, but for totally unrelated reasons. Popular hadiths have been quoted saying that this day was significant in history primarily for being the day when the Prophet Musa (Moses) and his companions were forever rid of the Pharaohâ€™s vice, when he was drowned in the waters of the Red Sea. The Jews always fasted on this day, but our beloved prophet Muhammad instructed Muslims to observe a two-day fast to include either the day before or the day after Ashura in order to mark our distinction from the Jews. Later in history, the martyrdom of Hussain would increase this dayâ€™s importance.

Observation
Shia Imams strongly insist that the day of Ashura should not be taken as a day of joy and festivity. The day of Ashura, according to Eighth Shia Imam â€œAli-al-Rida,â€ must be observed as a day of inactivity, sorrow and total disregard of worldly cares. 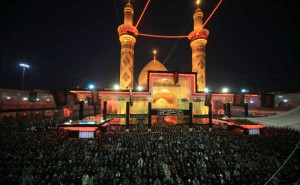 Despite its tragic outcome, many Muslims do celebrate this day and commemorate it as a day of victory for Islam. The martyrdom of Hussain gave new life to the message of Islam and to celebrate Muslims all over the world gather in mosques to remember the noble sacrifice of Hussain and his companions, hold seminars, and take out procession in the remembrance of this great martyr of Islam. This day is a reminder that Islam was saved not through violence and force, but through sacrifice.

My family honors Ashura and Hussain through charity. On the day of Ashura, we wake up early and my mother (with my familyâ€™s help) cooks a special meal called â€œHaleemâ€ in remembrance of the starved martyrs of Karbala. We take the food to a place where processions of people pass and serve them the food. We also set up a â€œSabeelâ€ (Water/Milk/Juices dispensing facility) in remembrance to the thirsty Martyrs of Karbala for the local precessions passing by as well for masses with no regards to any religion. For us, Ashura is a day of charity and coming together to celebrate what Hussain and his followers sacrificed so much to protect.