Today, we took a different route to the office so I once again recorded our trip. At one point, a police caravan drove by us going in the opposite direction and on the back of the truck there was a mounted 50-caliber machine gun and a guy with his finger on the trigger. That was pretty eye opening for Bryan and I and we were happy that they were going in the opposition direction. 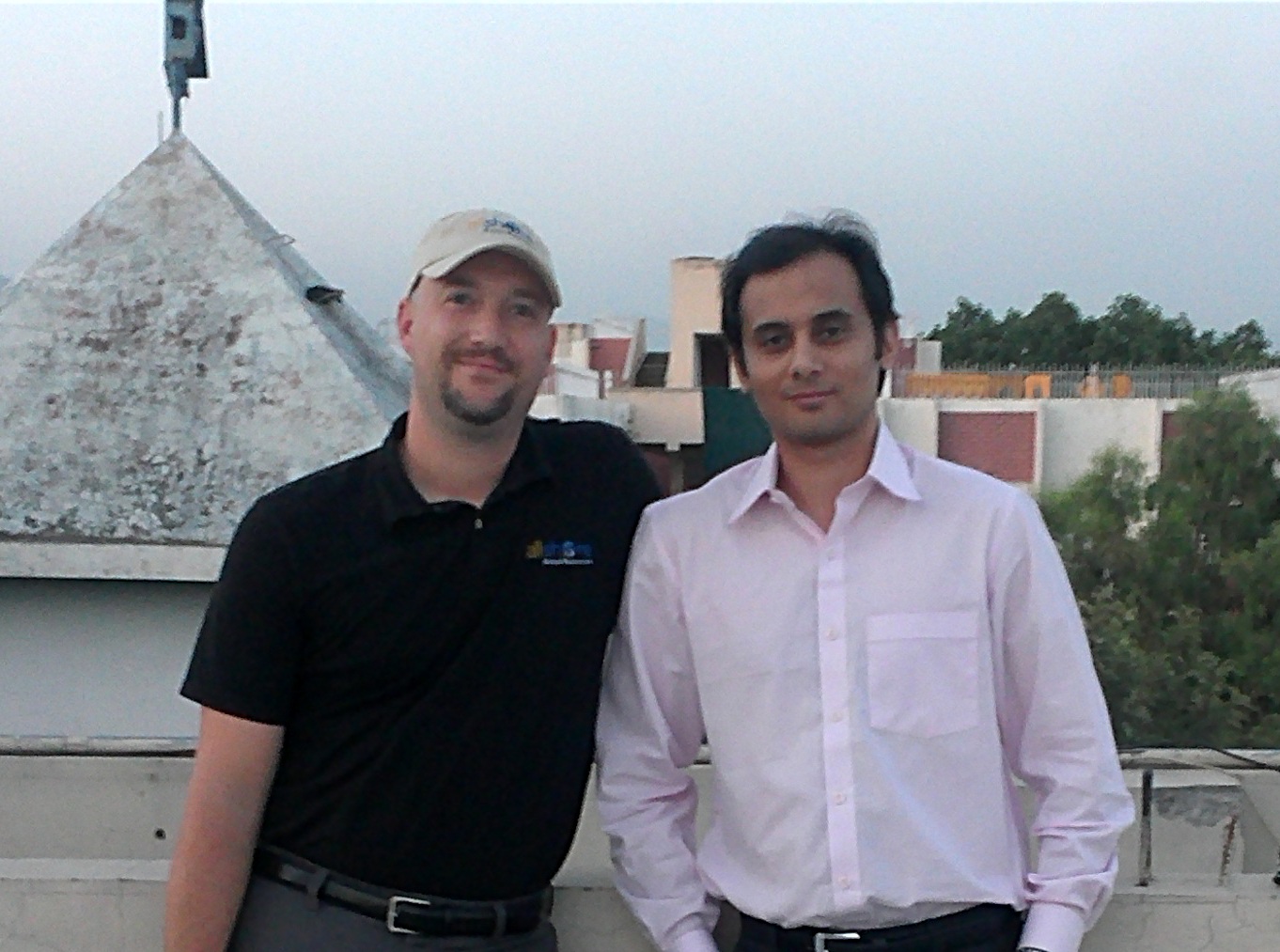 When we reached the office we were greeted with a happy surprise: our Lahore branch manager, Ahmed, had just arrived. Ahmed had a huge part in setting up our accommodations here in Islamabad and heâ€™s always so helpful in making sure we are well taken care of. It was great to finally get to meet him in person, but I didnâ€™t feel as if I was meeting him for the first time; it felt like the first time in a few days. We do a lot of face time videos via Skype so he and I both felt as if weâ€™ve known each other for many years. The only surprise was how tall we both are since we canâ€™t see that on Skype!

We headed upstairs to begin our daily management session. Nearly everyone showed up on time today, which is a huge improvement from Tuesdayâ€™s mandatory meeting where half of our guys were late. Punctuality is a cultural difference we are working hard to overcomeâ€”it is culturally acceptable in Pakistan to be tardy, while Americans put a high value on punctuality. We are trying our best to show them the importance of being on time for work and meetings as a sign of respect and so that they donâ€™t risk missing valuable information which then must be repeated, wasting time. These meeting have done a lot to clear up many misunderstandings like this and really helped all of us understand each otherâ€™s perspectives and how we can work better together and fulfill our roles.

We also managed to clear up another point today that I found really interesting. Yesterday, a developer asked me if he could wear shorts and flip-flops to work. Since Bryan and I wear that regularly, I couldnâ€™t see why not. I want everyone to be comfortable at work. However, when he arrived in shorts and flip flops today, our upper managers were very angry with him. We had another management meeting at the end of the shift tonight to discuss relaxing the dress code for these guys. I told them, that on the way to Pakistan, I considered changing my clothes in Abu Dhabi to more professional attire since I had only ever seen men wearing pants here. I even asked one of our receiving party members if it was ok for us to be in shorts and flip flops, and he said it was, because we were foreigners. So, you can imagine my surprise today when I saw that developer arrive in his very hip looking shorts and flip-flops. It is fascinating to me to see Pakistan transforming along more typically western lines, in many different ways. In Pakistan, we are a cutting edge software firm and I told our managers that in 5 â€“ 10 years when these younger guys get older, you are going to see many more software houses allowing shorts and flip-flops. They understood and agreed. It looks like Allshore is going to be a leader in changing fashion over here!

This trip has also allowed the guys to see me as who I am, rather than as just a title. When sitting down with my laptop in one of the developer halls, I overheard: â€œWhoa, the CEO is sitting with us. Wow.â€ I recognize the rift that a title can create and I am thankful for this opportunity to bridge it. I want these guys to know that I am not a normal CEO that they need to be nervous around; I am a guy that really enjoys working directly with them, and really wants to have a personal relationship with each and every one of them.

After our meetings, I had an opportunity to message with my wife, and she linked to an article that had caught her attention: a headline on the Huffington Post that said, â€œPAKISTANâ€™S REVENGEâ€ with a photo of Osama bin Laden. It was about the doctor that helped carry out the vaccination plan to capture bin Ladenâ€™s DNA; Pakistan has sentenced this man to 33 years in prison for treason. Naturally, being the inquisitive person that I am, I pulled up the Huffington Post and showed the new developer sitting beside me and asked him his thoughts. He agreed with his governmentâ€™s decision regarding the doctor and we had an incredible discussion about the case and bin Laden and his presence in Pakistan. We were able to discuss the situation openly and honestly, and it allowed me to understand it in a way I never thought possible from a perspective I had never before been given the chance to consider. It was an eye-opening opportunity and showed me that deep down, we share a common understanding that runs deeper than I had ever imagined.