Our day began with the usual eventful ride to the office. Each day Bryan and I sit in the back seat of the car giggling shamelessly at how out of control street traffic feels here. Itâ€™s like a near death experience every second of the trip, not for us, but for the crazy motorcycle drivers weaving in and out of traffic. They are usually small motorbikes with a 70cc engine carrying two grown men without helmets and people don’t seem to care about the lane markers on the roads. The moment a light turns green every car five rows deep immediately lays on their horn and the chaos resumes. Our driver is excellent and keeps right up with the best of them, but Bryan and I always look behind us every time we swerve, swearing that we just side swiped a motorbike into the concrete barriers that surround the roadway. To my surprise, we always turn back and see the rider still upright and motoring along.

Today’s focus was on changing the perception of our office in the Pakistan market place to try and make our company attractive to the local developers. Since our developers work the night shift, landing the top notch developers can sometimes be challenging. We are working on overcoming that hurdle by making Allshore cutting edge in the Pakistani business culture as well as an exceptional place to be employed. I have been gathering ideas from my one-on-one meetings with the developers about what they would like to see in the workplace and further discussing these ideas with the managers. We discuss ideas big and small, from giving ice cream treats to the developers each month if they do an extraordinary job, to ways of building unity within each team and their team leader.

Another important step in making our company more appealing is remodeling the office itself to really “WOW” new prospective developers that come through the doors. This might not seem like a huge thing to us in the U.S., but it will make a big impact over here. We also want to make a cooler work environment for our employees by creating a lounge area with a TV and a gaming system where the developers can hang out after/before work hours and enjoy each other’s company.

After the management meeting, we went around and greeted all the developers as they were coming into the office, and I noticed all the guys wearing their CoreVault baseball caps around the office. They really enjoyed this gift from one of our clients and it was cool to see them wearing it with so much pride. At this point in our visit the guys are really starting to loosen up and relax around us which has been really rewarding.

One of the greatest cultural experiences has naturally been our exposure to Islam. I was invited to observe a prayer ceremony today graciously accepted. Yasir, one of our dedicated developers, is a very religious man and leads prayer here in the office. He has given me a lot of insight into this part of their culture and helped me understand it just as he has taken the time to better understand my religious culture. This free exchange of ideas and customs has been an amazing part of this journey and something I am so thankful to this international company for giving me. It is interesting seeing the way the religious culture fits in with the overall culture too. The building the office is housed in has an amazing rooftop view of the city and every day the surrounding Mosques play prayers over loud speakers throughout the city. So when we are upstairs we can hear different prayers from all the Mosques around the office. It’s quite a surreal experience!

I had a great “small-world” moment this afternoon. As it turns out one of the interviewees that came in today not only knew where Oklahoma was, but had been there! He attended UCO for a semester before transferring to the University of Houston. We chatted for a very long time about Oklahoma, Texas and the U.S. in general; he even knew about the OKC Thunder and their awesome playoff run this year. I never expected to meet a new prospective employee over here that even knew where Oklahoma really was on a map!

After work hours tonight, everyone asked to see a head to head Ping Pong match (it’s called table tennis here) between the two head managers of our offices. Raheel and I took our paddles and set up on opposite ends of the table while the crowd gathered, cheering, and started placing bets on who would win. I managed to get the first point, but quickly fell behind until all the guys starting cheating for me, making up the score so I would always be ahead. It was by far the most fun I have had getting my butt kicked in in a game of table tennis.

Before we left for the night, Bryan and I went around and took pictures with all the developer teams that are working with clients so expect those soon!

Thanks for following my updates, and I hope they’ve been insightful. 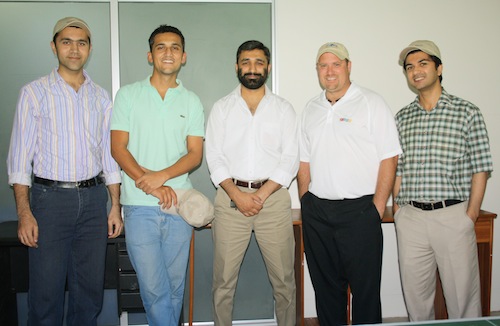