Allshore in Pakistan – Day One

In May 2012, Bryan and I embarked on our first trip to Pakistan. This month was a very important time in Allshore’s history, and I’m pleased to have the opportunity to share it with everyone. While we were visiting, I kept a blog to detail our journey. For the next few weeks, I will be sharing my updates with everyone here, starting from our overseas travel and first day in Pakistan:

Hello everyone and greetings from Islamabad, Pakistan. My 30-hour journey to get here has finally ended with one of the most amazing receptions I could have ever imaged from the guys that work for me.

Our journey began with our departure from Oklahoma City on Saturday at 12:00 PM. Bryan Rudd and I flew up to Chicago to get our connecting fourteen hour flight from Chicago to Abu Dhabi, UAE. We flew in a Boeing 777, and I have to tell you, it was about the most miserable time of my life. It was extremely crowded and offered zero room for a guy over 6 feet tall. We left Chicago around 8 PM, just when the sun was setting, and took off towards the Atlantic. Since we were traveling east, the sun appeared again around 1 AM and was up for the rest of the flight. We flew over Newfoundland and then out over the Atlantic crossing over England, Germany, Greece, Turkey, Lebanon, Syria, Saudi Arabia and finally landing in the UAE.

Abu Dhabiâ€™s airport was phenomenal! It was extremely modern and rivals any airport in the US. It was there we had our first real cultural experience: seeing men dressed in typical Arabic clothing. Everyone was extremely friendly and treated us with the utmost respect. As we walked down the terminal to find our flight to Pakistan we wondered what type of people we might encounter on our trip over. We were very curious to see how we would be treated on this leg of our journey since we totally expected to be the only white westerners from here on out and were not yet surrounded by companions.

We walked into the gate pretty early and found a few Pakistani people there already. They gave us the typical stare that anyone would when someone new walks into the room, but nothing much past that. We sat down and video-chatted with our families on Skype. About thirty minutes later, more people started trickling in, and among them were more white western-looking people. I had expected to be the only ones, but I was wrong; I counted approximately six of us.

As we were waiting for the plane, we started talking with one Pakistani man who appeared to be around 25 years of age and was dressed just like a typical American would be. We found out that he lives in Australia and was coming back to visit his family. He was extremely nice, and LOVED hearing my story of why we were going to Pakistan and was fascinated with how close I have become with my core group of workers here.

When we boarded the plane to Islamabad, Bryan and I sat next to each other. I was closely observing the people around me curious how we were going to be treated by some of the older Pakistani gentlemen on the plane. When boarding was finished, we noticed that several seats remained open and Bryan and I asked if we could spread out. I rose up out of my seat, and an elder Pakistani gentleman asked, â€œDo you mind if I sit in your window seat?â€ I said, â€œSURE!â€ and then I moved to my next seat. As I reached back to get my bag however, another elder Pakistani man said, â€œOnly you can sit there, your bag must remain!â€ Confused, I merely stared, but when I looked at his face and he had a big ole smile on his face and he said, â€œIâ€™m just playing with you!â€ We got a good laugh out of it. Something so simple really spoke to me in a huge way; from that point on, I was no longer nervous about our trip or how we would be received. When I got settled, another Pakistani man came to sit by me. He lived in the UK, but worked in Pakistan. He was Pakistani, born and raised, but he was a chemical engineer working overseas in the west that came back to Kashmir to work on projects. He and I chatted for about an hour about Pakistan, my company, the USA, etc. and it was extremely pleasant.

When we landed in Islamabad, we got off the plane and walked down the ladder and onto a bus where we encountered another surprise: English was being used everywhere! Even the small children were singing popular American children songs and there was a mixture of both Pakistani and western apparel worn by our fellow riders.

When we got off the bus and arrived in the customs and immigration area, there were two men standing outside of the crowd with our names printed on pieces of paper. We walked over to them and they motioned to another person to meet us. The gentleman that came to talk with us was a Customs and Immigration Supervisor as well as the father of one of my managers. He was extremely kind and gracious and thanked me for giving his son such a wonderful opportunity to learn and excel. He said, â€œFollow me, Iâ€™ll get you past all this mess.â€ And with that, he led Bryan and I right through the huge crowds of people and through some other security checkpoints, to get our bags, and then right outside the airport. I must admit, at that point I was a bit nervous because there had to have been 100 or more people waiting on their loved ones to come out of the airport and all eyes were on us.

I scanned the crowd to find Raheel and our receiving party, and found him accompanied by three other managers of my company. Raheel was dressed in a suit and looked sharp. They were all holding huge bouquets of flowers for us and I have to say, that was one of the coolest moments of my life. We all shook hands, embraced, and took in the shock that we were standing in each others presence after so many years of communication and cooperation, of growing such a strong company all remotely through Skype. The scene was amazing as the crowd surrounding us watched with fascination, surely wondering how these two casually dressed, apprehensive looking Americans came to be so loved by their fellow Pakistani citizens. 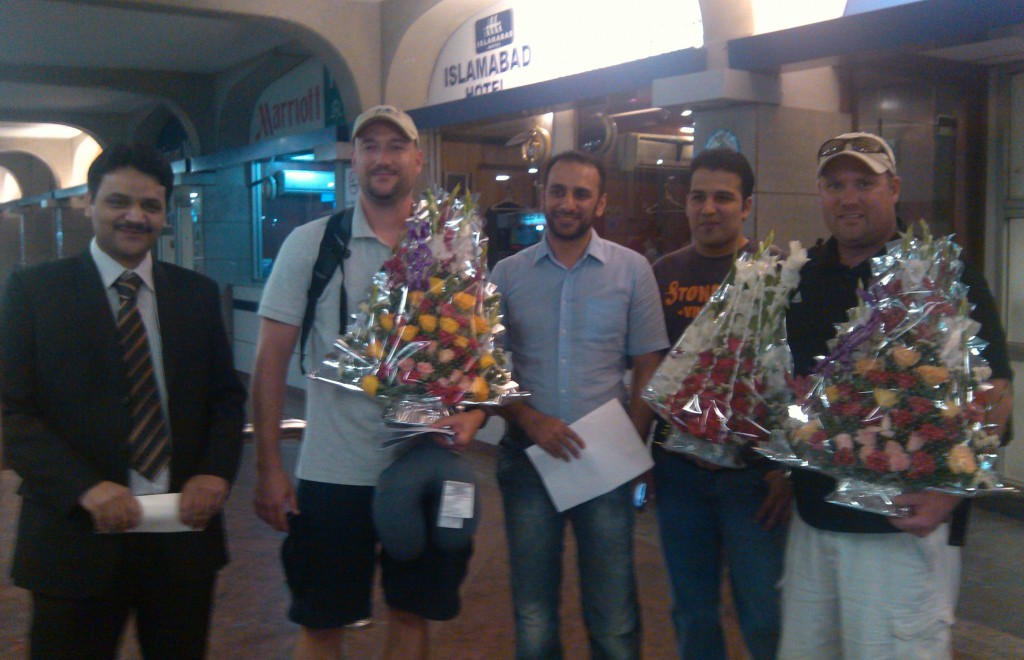 We took some photos before leaving, and a driver that Raheel hired for us arrived to take our luggage. Off we zoomed into the Pakistani night (it was 3:00 AM at that point). We drove straight to the Serena Hotel of Islamabad, a five star hotel with incredible security (we had to go through three checkpoints just to get to the reception area). Raheel, Nasir, Hammad, Bryan and I sat around for some time and just joked, laughed and bonded for a bit before they headed back to their homes for some rest. 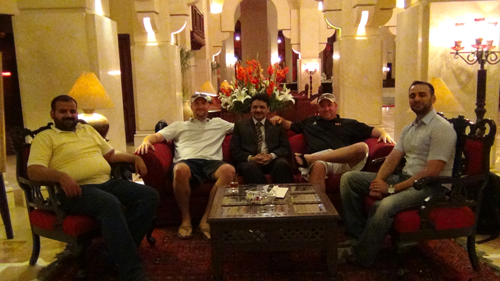 We are now in bed, going to sleep for a while before we head to the big office of 48 people that will surely be greeting us in the same manner. Itâ€™s very exciting stuff, and Iâ€™m already shocked at how amazing Bryan and I have been treated so far. The hotel staff even is bending over backwards to make sure we are getting everything we need.